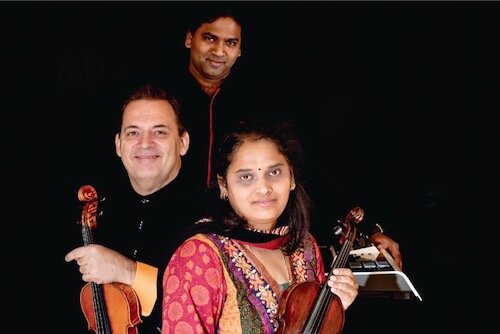 Raga Garage is music for the masses and connoisseurs alike with the concepts of Indian melody, western harmony and counterpoint. They present their art in an accessible way, breaking down barriers and bringing cultures and communities closer together. Jyotsna, Robert & Solomon have tailored their works to attract fans of classical & contemporary music of all ages.

Following their Italian debut at the Capri International Festival, a young music convert said Raga Garage was to him, “The sophisticated coming together of the sounds of the west and the east in a simple and enjoyable way”. Put simply, Raga Garage is a melting pot of many Indian and European classical influences culminating in a sound both new and unique.

Jyotsna Srikanth is the most sought after Indian violinist and composer from the UK known for her versatility and ability to collaborate with different genres seamlessly. She is intensely rooted in South Indian classical music alongside having formal western classical music education. Dr. Srikanth has featured in many major global music events and festivals such as WOMAD, Red Violin Festival in Wales and the BBC Proms. Having played the violin for nearly 200 Indian films, she is currently working on numerous large scale music experiments and collaborations bringing communities together. She is the artistic director of ‘London International Arts Festival’. Time Out has described Jyotsna as “Britain’s finest violinist of Indian classical music”.

Robert Atchison has been at the very top of international music-making for many years and has been described by the UK press as “a national treasure” He is the violinist with the world-renowned London Piano Trio and founder of the Altamira Chamber Orchestra, with whom he recently recorded Vivaldi’s Four Seasons with Sir Michael Gambon narrating the sonnets. He has collaborated with Prima Ballerina, Lisa Macuja Elizalde, Italian Film Star, Milena Vukotic, and as Artistic Director of the Gibbs Music Festival and Capri International Festival. He is also the leader of Lion King in London’s West End.

Shadrach Solomon is a composer, arranger, pianist and a music producer. He has mastered the skills of playing Indian Ragas on the Piano. He has worked with renowned musicians and music producers in India and abroad providing background scores to commercial movies and documentaries. He has participated in many music festivals both in India and abroad and specialises in the fusion genre on the performance front.

Karthik Mani hails from a family of musicians – his father, TAS Mani is a renowned percussionist of “The Karnataka College of Percussion”, and his mother R.A.Ramamani is a reputed groundbreaking Carnatic vocalist who has performed all over the world and has pioneered the genre of Carnatic-jazz fusion.

He has been performing concerts throughout India as well as abroad and has performed in various International Music Festivals all over the world. He is the first Indian percussionist to win the “Independent World Music Award” for World Fusion with “Lehera”.