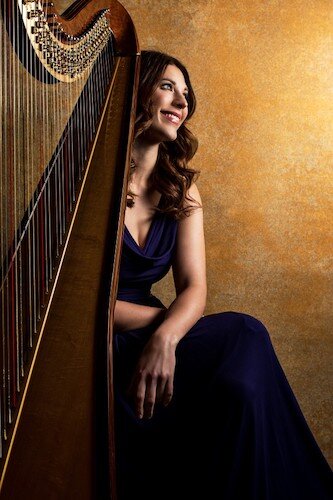 At Buzz we have the advantage of being musicians ourselves and having the luxury of handpicking players who we know are not just at the top of their game, but reliable, adaptable for all sorts of different occasions and easy to deal with.

We have both had the pleasure of working with this harpist and she is all of these things. Jonny and Cressida of Buzz Music have both witnessed her perform to the highest standard on live television when working for ITV’s Popstar to Operastar.

Her session work includes recording tracks for many well-known artists including John Legend, Ellie Goulding, Sam Smith & Morrissey. She also has played on the soundtracks for several Hollywood films & television dramas for composers such as Danny Elfman & James Newton-Howard. On television she has performed on all the major shows, including Strictly Come Dancing, The Graham Norton Show, Later with Jools Holland, The Jonathan Ross Show and many more, with artists including The Killers, Bette Midler & Beyoncé.

She has toured and performed live with a wide range of artists, such as Kanye West, George Benson, Jay-Z & Alfie Boe.

She is also no stranger to the West-End theatre, having been the harpist for A Chorus Line at the London Palladium, Umbrellas of Cherbourg and many performances of Gypsy & the Wizard of Oz.

Having someone of this calibre playing for your wedding, corporate event or special occasion brings a variety, musicality and elegant ambience that we guarantee you will be delighted to have invested in.